By Austin on July 1, 2020 2:17 PMComments Off on Fair winds and following seas: Rockwall remembers life and legacy of Captain Scott Self

(ROCKWALL, TX – July 1, 2020) Sail With Scott founder and former Rockwall mayor Scott Self passed away on June 30th. Scott succumbed to complications with cancer while on hospice at his home at the age of 70.

To call Scott an experienced sailor would be an understatement. He first learned at the young age of 10 from his dad, and now you’ll find his name in the top 10 of every major class of sailboats at National Championship from Sunfish to 60 footers. Among his highly impressive list of accomplishments as a sailor include the 2007 US Coast Guard Master Captains 100-ton license; 2005 division winner of the Transpac Yacht Race, from Los Angeles to Hawaii; 2005, 2006, and 2012 overall winner of the Harvest Moon Race from Galveston to Port Aransas; 2004 2nd Place in J-22 World Championship, and 1973 Winner of Men’s North American Sailing Championship (Mallory Cup). He raced twice in the Fastnet Race, winning his division. In 2014, he sailed a 60 sloop from Houston through the Panama Canal and onto Marina Del Ray, California. He even raced across the Atlantic Ocean twice in a 44-foot sailboat (once heading east and once heading west)! The first crossing took him 31 days, and he nearly cut that in half on the second race, which he completed in just 17 days.

As an avid seaman, it’s no surprise that Scott wanted to spend every day of his retirement doing what he loved most: sailing. So he spent two years down at the Chandlers Landing Marina hand crafting what was to become the iconic Seawolf, a 40 x 25 foot sailing catamaran with some of the most eye-catching colorful sails around. He founded Sail With Scott in 2008 after he built the vessel, offering daily sailing cruises on Lake Ray Hubbard for up to 49 guests. That same year, Scott had the privilege of welcoming American Idol Season 7 finalist and Rockwall native Jason Castro aboard the Seawolf as they sailed into The Harbor for his homecoming concert.

Scott captained hundreds of cruises on the lake for birthday parties, corporate events, weddings and even burials at sea aboard Seawolf. People from the Rockwall community and beyond enjoyed many beautiful sunsets on the lake aboard Seawolf, and Scott loved being able to share the joys of sailing with them. Rockwall resident Jeff Macalik recalled a time when he and Scott made a voyage to the Sunshine State from Jamaica. “Sailing with Scott from Jamaica to Florida was the adventure of a lifetime,” said Macalik.

In fact, after Scott married his wife, Jan Self, the two went on a six-month honeymoon sailing a 44-ft. Swan sailboat down the coast of Europe to Africa and on to the Canary islands. The two had a saying: couples that sail together, stay together. That certainly held true for Scott and Jan, who recently celebrated 47 years of marriage earlier this month before his passing.

Perhaps no one embodied the Rockwall Rotary’s motto of “Service Above Self” more than Scott. He served as a Rotarian for many years, and most recently chaired the club’s biggest annual fundraiser in the Hot Rocks Bike Ride last year. The successful event helped the Rotary provide $10,000 scholarships for two local high school seniors.

Scott also served on the Board of Directors for Rockwall County Helping Hands for eight years, as well as on the board of the Rockwall Chamber of Commerce, the Rockwall Housing Development Corporation, Women In Need, and as Chairman of the Board of Managers for the Rockwall YMCA in 1986. Every summer, he would take the kids with special needs from the Y’s Angel Camp out for a cruise on Lake Ray Hubbard aboard Seawolf. Scott was also a recipient of the Larry Parks YMCA Service Award.

“Scott was largely responsible for the last two capital campaigns that covered the pool back around 1997, as he had a donor give $250,000 and there was a matching offer on the table of $250,000. So in one call he effectively raised the entire $500,00 amount. He was also the connection to Bob Chilton for the last capital campaign which was the big remodel of our facility,” said Mike Atkins, who served as the J.E.R. Chilton YMCA at Rockwall’s executive director at the time when Scott was serving as the Board of Managers Chair for the Y. 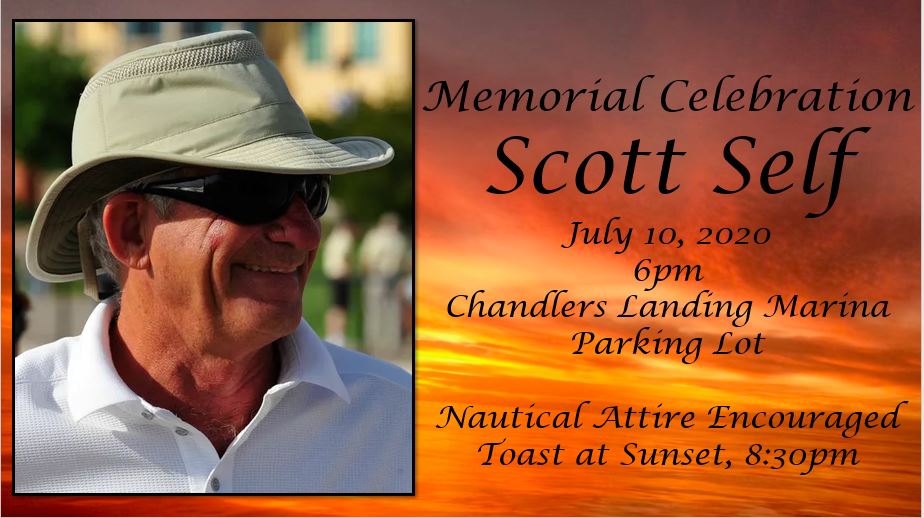 Scott Self was born to Dr. Stanley Allen and Gloria Rust Self in Victoria, Texas.  In 1963 the family moved to Fort Worth, Texas where he graduated from Paschal High School in 1968.  During those years in Fort Worth, Scott learned to sail a Sunfish sailboat and worked on the family’s cattle ranch near Saginaw, Texas.

Scott graduated from Texas Christian University in 1972 with an honors degree in Economics, where he was a member of the Delta Tau Delta fraternity. TCU is also where he met his wife, Jan, whom he married on June 9, 1973 in her parents’ backyard—-a 50’ magnolia tree as their altar.  Their honeymoon was spent sailing and racing Dick Williamson’s Swan 44 Stuart Little from Cowes on the Isle of Wight, England, then home to the states via La Rochelle, Lisbon, Gibraltar, Morocco, Canary Islands and the Bahamas.

Upon their return, Scott worked for Merrill Lynch as a stock broker in Dallas. Four years later in 1977, he bought a company that produced Micro Brush, renamed it ProSoap, and moved the company to Rockwall. He and Jan moved to Chandlers Landing and Scott was able to pursue his love of sailboat racing on Lake Ray Hubbard—-the best sailing lake in Texas due to its shape and orientation to the prevailing southerly breezes.

In 1990, Scott began his political career and was elected to his first office in Rockwall as County Treasurer in which he served seven years. In 1999, he was elected to Rockwall City Council, and in 2000, he was elected Mayor of Rockwall.  From 2003 until 2006, he served as Rockwall County Commissioner. His proudest accomplishments in these roles were doubling the size of Harry Myers Park and increasing the biking trails, starting the process of Hometown 2000, and keeping taxes in Rockwall the lowest in the Metroplex.

Scott never stopped serving his community. In 2001 at age 51, Scott began a five-year career as a volunteer firefighter for the Rockwall Fire Department, and served as the President of the Rockwall Firefighters Association in 2005. He spent eight years as a Board Member of Rockwall County Helping Hands and recently served on the board of Women In Need, as well as serving in numerous other volunteer organizations.

Scott’s sailing career was illustrious. Scott crewed on the winning boat in the 1973 North American Men’s Sailing Championship, known as the Mallory Cup. That same year, he competed in the 420 World Championships held off the coast of Israel during the Israeli 1973 Yom Kippur war with Egypt.  A story Scott liked to tell was that his crew had become ill and Scott was facing dropping out so the Israeli sailing committee kindly offered a substitute crew.  The substitute showed up and Scott asked what he did for a living.  The sub responded, “I’m a fighter pilot. They told me if I could get here in time, I could sail with you, so I put on the afterburners and here I am!”  Scott and his new crew placed ninth out of 75 of the best world-class teams.

Further admirable finishes in his sailboat racing career include racing the aforementioned Stuart Little in the Fastnet Race of Great Britain, placing sixth in the 1994 J-22 World Championships in Holland, and again in 1996, as well as placing second in the J-22 United States Championship in 2004.

In 2005, Scott and his longtime sailing partner Nigel Brown won the double-handed division of the Transpac race from Los Angeles to Hawaii aboard their Hobie 33, Soap Opera. Later that same year, he and Nigel were the Overall Winners of the Harvest Moon Regatta, which they came back to win overall again in 2006 and in 2012. These are the highlights but in brief, Scott placed in the top 10 in every major class of National Championships from Sunfish to 60 footers.

In addition to his racing career, he also sailed open oceans. At age 17, he single-handedly sailed a small boat named Sprinter from Galveston to Corpus Christi, without any sea charts. He sailed across the Atlantic Ocean twice, once heading east, and again heading west.  And in 2007, Scott became a United States Coast Guard 100 Ton Masters Captain. He captained three sailing yachts through the Panama Canal:  Erik Oisted’s Angantyr, Bobby Pryor’s Poetry and most recently a 70 foot catamaran, Chamonix, in February 2020.

Scott has introduced thousands of people to the love of sailing aboard Seawolf, a 25’ x 40’ catamaran he custom built himself inside his company’s warehouse. Over the past 12 seasons, Scott has taken over 30,000 people sailing and performed over 700 weddings.  He built “Sail With Scott” to be a unique attraction for the DFW metroplex.

Scott was also physically very active throughout his life.. He ran 10 marathons, including the prestigious NYC Marathon in 1990, the original Athens, Greece Marathon, as well as four Dallas Marathons. He was also an avid cyclist with his wife Jan and rode the AIDS 3-Day Ride from Houston to Dallas three times.  He completed the HHH Century (100 miles) bike ride in Wichita Falls three times, twice with Jan on a tandem bike.  In 2018, Scott, Jan and Chandler hiked and summited Mount Kilimanjaro together.

For most workdays of the past 16 years, Scott looked forward to having lunch with one of his best friends, consultant and confidant: his son, Billy.

In lieu of flowers, donations may be made in Scott’s honor to Women in Need (wintexas.org).

Obituary submitted by Chandler Self, for publication in Blue Ribbon News.

Fair winds and following seas: Rockwall remembers life and legacy of Captain Scott Self added by Austin on July 1, 2020 2:17 PM
View all posts by Austin →