By Editor on July 9, 2021 3:44 PMComments Off on Rockwall City Council recognizes lifesaving teens 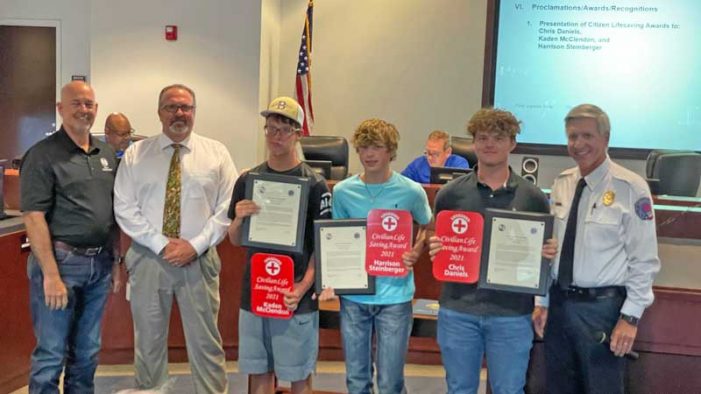 On the afternoon of June 29, lifeguards Harrison Steinberger, Kaden McClendon and Chris Daniels were on duty at the Gloria Williams swimming pool near Downtown Rockwall, when they noticed a little boy in an instant had lost his footing, and began drifting into the deep end of the pool, eventually going under water completely. The three lifeguards immediately went to work with rescue efforts, pulling the child from the water, beginning CPR and calling 911. When they started, the child did not have a pulse, then after the first round of CPR he expelled water from his lungs but was still unresponsive. In the third round of CPR, the boy began to respond. Once the ambulance arrived, the boy was transported to a Dallas hospital, where he was released the next day.

When presenting the award to the young men, Assistant Fire Chief Brett Merritt expressed the gravity and importance of their awards. “Others may have awards that seem worthwhile for sports or academic achievements,” Merritt said. “But you will always have your lifesaving awards, and no one can compete with that.”