By Austin on July 23, 2021 9:22 AMComments Off on Rockwall dedicates Harbor lighthouse to local legend and master sailor Scott Self 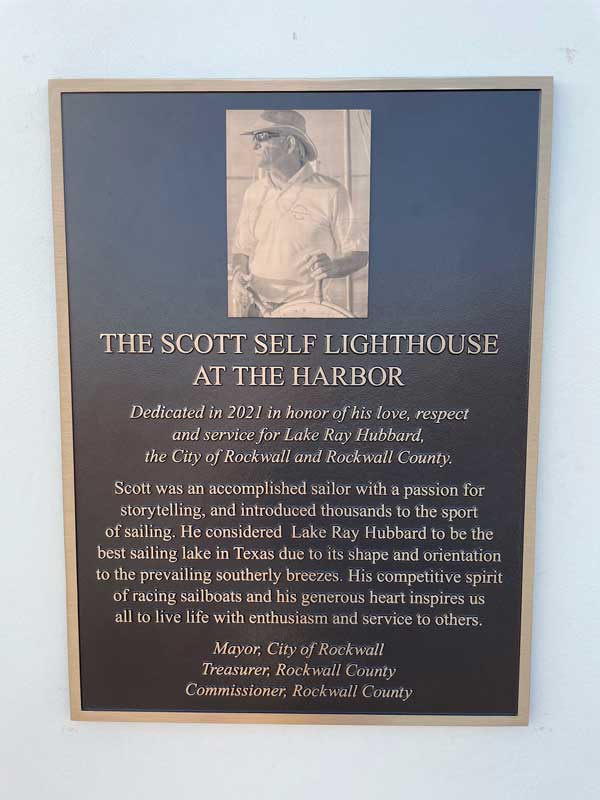 ROCKWALL, TX – July 23, 2021 — The late Scott Self dedicated his life to sharing his passion for sailing and the love for his Rockwall community. What could be more fitting than to dedicate a lighthouse in his honor?

Prior to the Concert by the Lake on Thursday, July 22nd, dozens gathered to witness the dedication of the Scott Self Lighthouse at The Harbor. Rockwall councilmember Dana Macalik led the special ceremony, which saw a plaque unveiled and installed on the lighthouse in recognition of Captain Scott’s legacy. The Sail With Scott founder and former Rockwall mayor passed away on June 30th last year.

“Scott Self was kind, funny, and very generous,” Macalik said. “It is an honor to have called him a friend and to be here today to recognize his accomplishments and vision for our community, with this naming so that his legacy will live on in The Harbor he helped make successful! Thank you, Scott.”

An avid and highly accomplished sailor, Scott made the top 10 in every major class of sailboats of the National Championships. He would sail competitively or just for the fun of it, often taking to the open seas; He captained three separate trips through the Panama Canal.

But there wasn’t a place he enjoyed sailing more than Lake Ray Hubbard, which he considered to be the best sailing lake in Texas due to its shape and orientation to the prevailing southerly breezes. He loved sailing so much, he couldn’t help but want to share it with his beloved Rockwall community. So he built a 25′ x 40′ catamaran called Seawolf and offered sunset cruises on the lake. He founded Sail With Scott in 2008 after he built the vessel, and spent 12 seasons taking over 30,000 people sailing. He even performed wedding ceremonies aboard his beloved Seawolf — more than 700 of them, in fact.

Scott held just about every elected position one can think of in the city and county of Rockwall, from councilman, to treasurer, to commissioner, to Mayor. His proudest accomplishments in these roles were doubling the size of Harry Myers Park and increasing the biking trails, starting the process of Hometown 2000, and keeping taxes in Rockwall among the lowest in the DFW metroplex.

When Scott and his wife Jan moved to Rockwall, they immediately got involved in the community whenever and wherever they could. Scott served in the Rockwall Rotary for many years, and chaired the club’s biggest annual fundraiser in the Hot Rocks Bike Ride in 2019. He became involved on the boards of several area charities and organizations including Rockwall County Helping Hands, the Rockwall Area Chamber of Commerce, Rockwall Housing Development Corporation, and Women In Need. Scott was highly involved with the J.E.R. Chilton YMCA at Rockwall, having served as Chairman of the Board of Managers for the Rockwall Y in 1986.

Scott was the guiding light for so many in the community. With the dedication of The Harbor’s lighthouse, his legacy will continue to shine on as a symbol of strength and hope for Rockwall.

“This is very special for our family,” said Billy Self, son of Scott Self. “My dad loved sailing more than anything, and was passionate about showing people sailing. We’re very thankful for this lighthouse dedication.”

Rockwall dedicates Harbor lighthouse to local legend and master sailor Scott Self added by Austin on July 23, 2021 9:22 AM
View all posts by Austin →