By Editor on July 7, 2021 11:58 AMComments Off on Rockwall Fire Department honors three young men for saving life of drowning boy 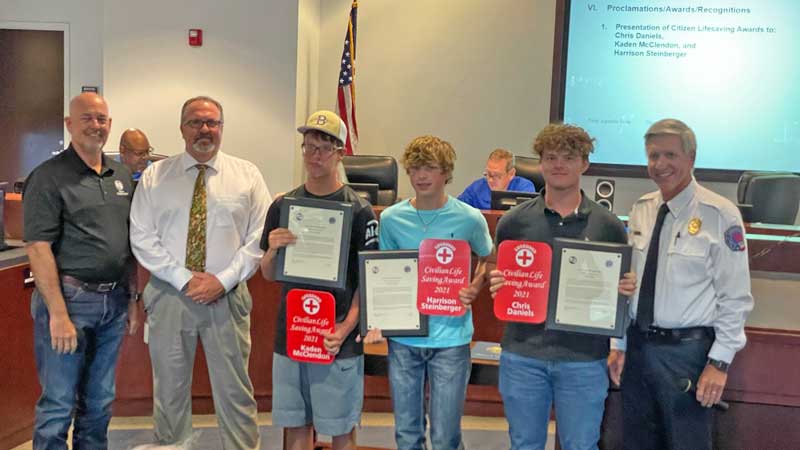 ROCKWALL, TX (July 7, 2021) During the Rockwall city council meeting on Tuesday, July 6, three young lifeguards were recognized for their heroic efforts in saving the life of a drowning boy last week.

On the afternoon of June 29, 2021, lifeguards Harrison Steinberger, Kaden McClendon, and Chris Daniels were on duty at the Gloria Williams Swimming Pool located at 807 Davey Crockett Street in Rockwall. At approximately 1:45 p.m. the three observed a young child floating lifelessly in the pool. The child had lost his footing and began drifting into the deep end of the pool eventually going under water completely.

After sounding their emergency whistles, all three lifeguards immediately initiated rescue efforts. Steinberger started communications with 911 as McClendon pulled the child from the pool. Daniels began single-person CPR after performing a rapid assessment and nothing that he had no pulse and was not breathing. As soon as McClendon was out of the water he teamed up with Daniels, and they started two-person CPR with Steinberger still in communication with 911 dispatcher. The first round of CPR resulted in the child expelling water from his lungs, but he was still unresponsive. On the third round of CPR the child began to respond and was rolled on his side. He was transported by ambulance to a Dallas hospital where he was admitted for observation and released the next day having made a complete recovery.

Steinberger, McClendon, and Daniels were presented with the Rockwall Fire Department’s Citizen Lifesaving Award for their quick and selfless actions in saving the life of another.