By Austin on August 12, 2021 8:40 PMComments Off on Rockwall YMCA lifeguards recognized for saving life of drowning boy

ROCKWALL, TX – August 12, 2021 — Three lifeguards with the J.E.R. Chilton YMCA at Rockwall Aquatics program were recognized today for their quick actions in saving the life of a young boy who nearly drowned.

On the afternoon of June 25, lifeguards Brown, Yoes and Markarian were on duty at the YMCA swimming pool.  At about 1:15 p.m. the three lifeguards observed a young child floating lifelessly in the pool – a camper with the Rockwall Y’s Angel Camp program for kids with special needs. Upon recognizing the urgency of the situation, all three lifeguards immediately initiated rescue efforts. Brown removed the swimmer from the water as Markarian called 911 and Yoes retrieved emergency equipment. The lifeguard team provided rescue breaths and were unable to feel a pulse or signs of breathing. They attached an AED and after three rounds of CPR, the young swimmer regained consciousness as first responders were arriving on the scene. The patient was transported by ambulance to a hospital for observation and was released a few days later.

“Whereas Berkley Brown, Tatum Yoes and Elijah Markarian acted quickly and selflessly to save the life of another, be it resolved that they be presented the Rockwall Fire Department’s Citizen Lifesaving Award on this 12th day of August, 2021,” said Fire Chief Kenneth Cullins, reading plaques given to the lifeguards. “It’s really extra special to have family and friends here to recognize the work that they did.”

Cullins added, “It was really ironic that within five days in Rockwall we had two near drownings – one at this pool and one at another, and I think oftentimes lifeguards, while they certainly get the training and they’re prepared to do what they need to do, rarely do they have to do that – but in this case they did, and they really did an extraordinary job. Their training paid off; we’re just really proud of you guys.”

Myron Barron, YMCA Aquatics Director, commended the lifeguards for their quick and decisive action. “To see them put their training into action is just really awesome. Here at the YMCA, our lifeguards take their training and their responsibilities very seriously and in this case, it really showed.” 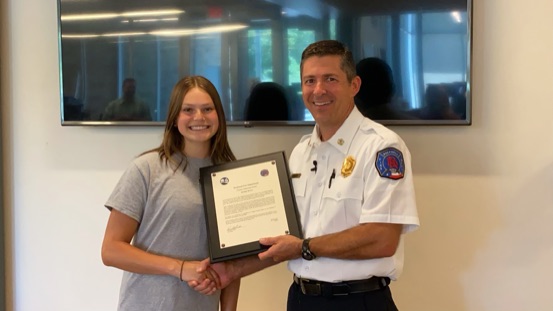 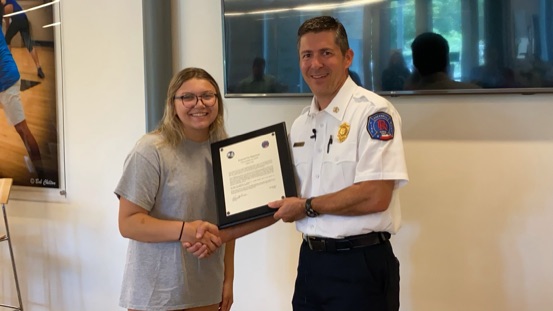 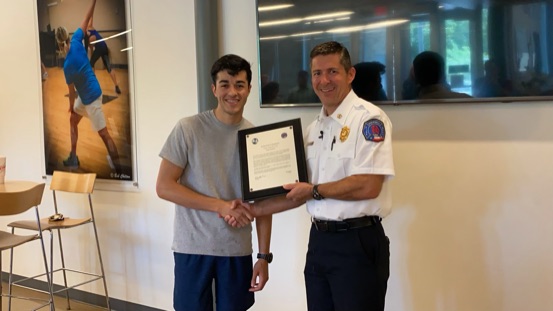