By Austin on June 5, 2020 10:00 AMComments Off on Lifelong Heath resident and war veteran Wayne Jones celebrates his 95th birthday 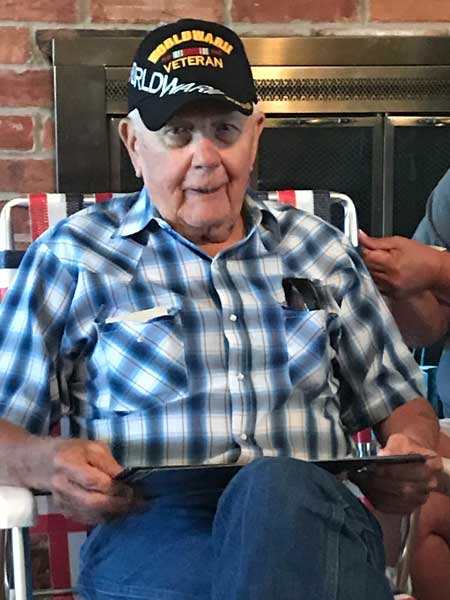 Wayne has lived all his life in Heath. He served in the Army in Japan during World War II. On the boat over to Japan, a Captain one day asked him how he got on this ship and he told him that he was a soldier. The Captain said, “How old are you?” to which Wayne replied, “I’m 18, Captain.” The Captain couldn’t believe it; he thought Wayne was a 14-year-old who had somehow managed to sneak his way onto the boat! He put Wayne to work in the kitchen as a cook during his service.

Wayne’s late wife was Neta Smirl Jones, from the well-known Smirl family of Heath (Smirl Drive in Heath is named for that family). They had one son Jeffrey, three grandchildren and seven great grandchildren.

Wayne is a lifetime member of First Baptist Church of Heath, where he has served as a deacon and a board member of the Heath Cemetery. Even at his age, Wayne knows his dates extremely well and can tell you exactly where someone is buried in the cemetery. He has also served the City of Heath Volunteer Fire Department, as it was known back in the day. Early in life he worked as a farmer, followed by a 30-year stint at Otto Coerver Industries working in the metal department making elevators.

These days you can often find Wayne sitting in his chair outside and counting the cars as they zoom by on the four lanes in front of his house. That’s something that’s still hard for him to fathom, as he was raised in the days of dirt roads and would walk to Rockwall or maybe hitchhike a ride to Dallas.

He would tell you that life has been sad at times with losing love ones, his twin in a plane crash, the love of this life and his only child, but that God has also blessed him with family and friends.

Lifelong Heath resident and war veteran Wayne Jones celebrates his 95th birthday added by Austin on June 5, 2020 10:00 AM
View all posts by Austin →