Help finish the fight against cancer ROCKWALL COUNTY, TX (Jan. 10, 2015) Put on your boots and head to Southern Junction Nightclub & Steakhouse from 6:30 to 8:30 p.m. Wednesday, January 28 for the Rockwall County Relay for Life Kick-Off Party. Enjoy two-for-one steaks with entertainment by Matthew Middleton. The theme for the 2015 Relay […]

ROCKWALL, TX (Jan. 24, 2015) Save the date: The Boot Scootin’ Ball, Rockwall Pets’ Annual Fundraiser and Silent Auction, will be March 20, 2015 at Southern Junction. Rockwall Pets is now collecting donations for the auction. Did you get something for Christmas you don’t have a use for? Donate it to help their homeless pets and […]

SAVE THE DATE – TICKETS AVAILABLE NOW FOR BUNCO FUNDRAISER ROCKWALL/ROYSE CITY, TX (Dec. 1, 2014) Moms Club of Rockwall and Southern Junction will present the 3rd Annual Bunco Fundraiser for the Rainbow Room of Rockwall beginning at 6 p.m. Tuesday, Feb. 24. Join in on the fun this year for a night of dice, […]

Not to mention Cowboys football, 1/2 price drinks and no cover charge! Contest presented by Peghead Guitars, winner opens for Deryl Dodd ROCKWALL/ROYSE CITY, TX (October 24, 2014) Peghead Guitars in Rockwall and Southern Junction Nightclub & Steakhouse in Royse City teamed up for the SoJo Serenader Singer/Songwriter Competition, and the final showdown is this Monday, October […]

ROCKWALL, TX (October 7, 2014) Dallas-born singer/songwriter Deryl Dodd is best known for country hits like “Tony Lama Boots,” “Friends Don’t Drive Friends,” and “Back to the Honky Tonks.” But Dodd is more than a popular musician; he is an advocate for people with disabilities. Dodd has performed benefit concerts for children with Eagle-Barrett syndrome, […]

ROCKWALL/ ROYSE CITY (July 16, 2014) Big Gus’ Swampadelic Catfish Tournament & Fry was sizzling with excitement last weekend as contestants poured in, hauling their huge fish along with them. The winning fish was caught by Dakota McBride and Kyle Phillips of Team Texas, weighing in at 61 lbs 14 oz. Second place went to […] 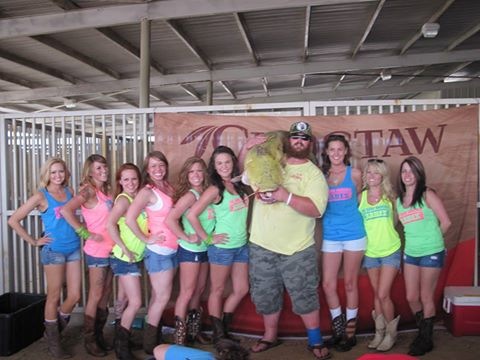