(ROCKWALL, TX — Sept. 19, 2019) The Rockwall Yellowjackets and Heath Hawks couldn’t have asked for a better start to the high school football season. With Rockwall at 2-1 (their only loss was a heartbreaker to Highland Park) and Heath currently undefeated for the first time since 2013 at 3-0, this season’s I-30 Classic game promises to be one heck of an entertaining matchup.

Yesterday, the Rockwall Chamber of Commerce heard from Rockwall ISD Athletic Director Russ Reeves, Rockwall and Heath football head coaches Rodney Webb and Mike Spradlin on the recent success of the two programs leading up to the big rivalry showdown on Oct. 11.

“I couldn’t have more respect for Rodney Webb and what he does at Rockwall High School,” said Spradlin, who’s in his debut season as head coach of the Heath Hawks. “Do we want to win? Absolutely. And I know they do, too. That’s part of the rivalry. Don’t ask me to like it if we don’t win, but that doesn’t mean we don’t respect it. That’s a big part of this rivalry.”

Reeves said the rivalry always brings intense play on the field, but also an equally intense mutual respect between both teams off the field. It’s those two things together, he said, that make the rivalry much more meaningful for both communities.

The Jackets have some tough tests coming up before the big I-30 Classic showdown against Heath. Tomorrow night the Jackets face state ranked Arlington Martin, then the defending state champion Longview the next week, followed by Mesquite Horn the week after.

Meanwhile, Heath squares off against offensive juggernaut McKinney North (2-1) on the road tonight. McKinney North averages 53 points per game through three games this season, but bring a porous defense into the contest which has allowed an average of 56 points per game. The Hawks will then go head to head with a couple of currently undefeated teams in Tyler Lee and Mesquite the following weeks.

Rockwall’s top receiver Jaxon Smith-Njigba will likely bring a 6A milestone in receiving yards into the Jackets-Hawks rivalry game. Smith-Njigba has 3,845 yards receiving through three seasons and three games this season playing varsity ball for the Jackets. That ranks him No. 2 all time in Class 6A in Texas high school history. He’s just 500 yards shy of the 6A record for career receiving yards, and through three games has racked up 587 yards and eight touchdowns.

Rockwall and Rockwall-Heath boast the top two quarterbacks in 6A right now in sophomores Braedyn Locke (RHS) and Josh Hoover (RHHS). Locke has amassed 1,232 yards through the air through three games, with 13 touchdowns and only one interception. Hoover has completed 62 percent of his passes while throwing for 972 yards, 10 touchdowns and three interceptions this season.

The I-30 Classic showdown between Rockwall and Heath kicks off at 7:30 p.m. on Friday, Oct. 11 at Wilkerson-Sanders Stadium.

Tune in live to every Rockwall Yellowjackets and Heath Hawks football game here. 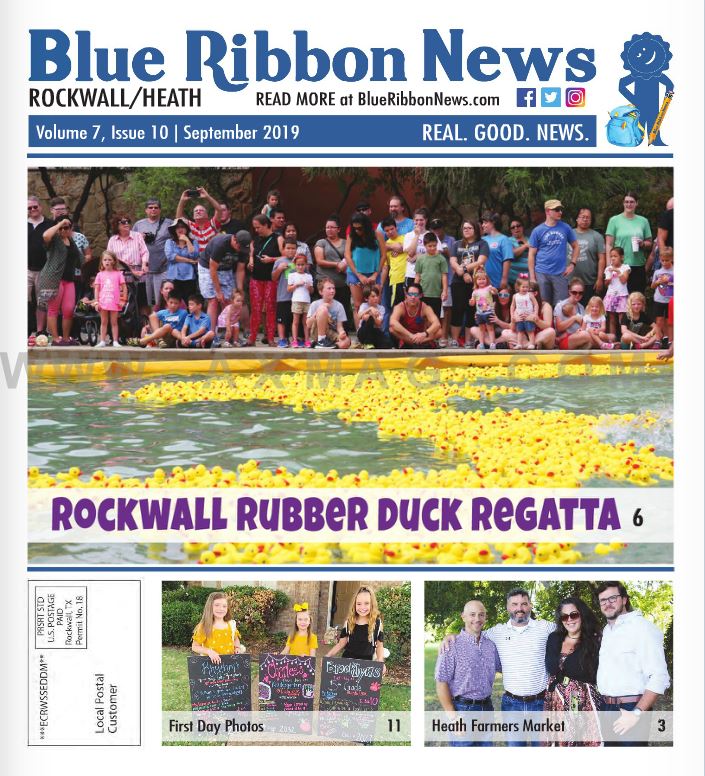 Our monthly print edition is delivered free to ~22,000 homes in Rockwall and Heath, TX.To share your good news and events, email editor@BlueRibbonNews.com.