By Editor on April 5, 2020 2:16 PMComments Off on Patti Richter, On Faith: Panic, Peace, and Paradise Lost and Found 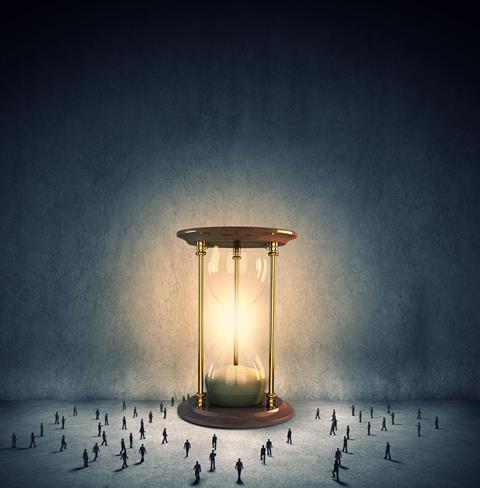 (ROCKWALL, TX – April 5, 2020) My heart beats faster as the clock strikes midnight in the fairy tale movie. Cinderella is running down the castle steps with the awful realization that her beautiful clothing will soon return to rags.

I recall two episodes of real panic, and both involved the same child. Our son, at age three, left my side in a large department store. I endured some dreadful minutes before finding him with his father in the paint department. As a five-year-old, he climbed the cliff in a friend’s backyard, and the two of them became lost in Albuquerque’s high desert mesa. I grew frantic, along with the other mother and the local police, until the boys found their way back down a few hours later.

We typically panic when the wheel of life spins out of control. Especially when our plans for the future—or today, or the next hour—are endangered.

The pompous little virus currently reigning over the earth has affected the global populace in numbers that rival the tulips popping up with spring. And its mild-to-severe effects are mimicked in the widespread reactions to it. We’re stressed by the large-scale disruptions to our personal world: cancelled; closed. Many understandably grieve over missed opportunities. On the higher end of this spectrum, besides our worries about lost income or investments and a likely economic recession, we may fear catching the potentially deadly illness.

While government and health organizations try to protect us, the scenes playing out in the daily news reveal our lack of control over things unforeseeable.  The increasing number of lives claimed by this invisible army of germs causes me to consider the awful distress that must overtake a soul who is unprepared to die.

My husband and I once endured a turbulent flight in a small commuter plane. The storm-tossed aircraft jerked up, down, and sideways like a vintage amusement park ride. Passengers remained silent during the worst of it, but I couldn’t help turning to Jim with a question: “In case we only have a minute to live, is there anything you’d like to tell me?” With perhaps a two-second lapse, my calm husband replied, “See you in a few minutes.”

Faith does this for the believer. Our natural fear at the possibility of impending doom is alleviated by the hope of eternal life through Jesus, our Redeemer. We have this assurance: “He saved us, not because of righteous things we had done, but because of his mercy” (Titus 3:5*).

Dread surely overtook two thieves who suffered the cruel punishment of hanging on a cross. Their place in dying beside the man believed by many to be the Son of God did not immediately console either of them. One of the men bitterly mocked Jesus, saying, “Aren’t you the Christ? Save yourself and us!” The other made a last-ditch effort to obtain mercy; he admitted his guilt and recognized his only hope: “Jesus, remember me when you come into your kingdom.” While the first man received no reply, the second man gained the Savior’s comforting promise, “I tell you the truth, today you will be with me in paradise” (Luke 23:39 – 43).

When the clock strikes midnight—as it will for each of us—those who trust in the good news of Christ’s atoning work won’t need to panic. We are clothed in his righteousness in place of our “filthy rags,” (Isaiah 64:6).

“Whoever is thirsty, let him come; and whoever wishes, let him take the free gift of the water of life” (Revelation 22:17).

*Scriptures from the New International Version

Patti Richter, On Faith: Panic, Peace, and Paradise Lost and Found added by Editor on April 5, 2020 2:16 PM
View all posts by Editor →