By Editor on January 1, 2021 2:06 PMComments Off on Terry Garrett sworn in as Rockwall County Sheriff this morning 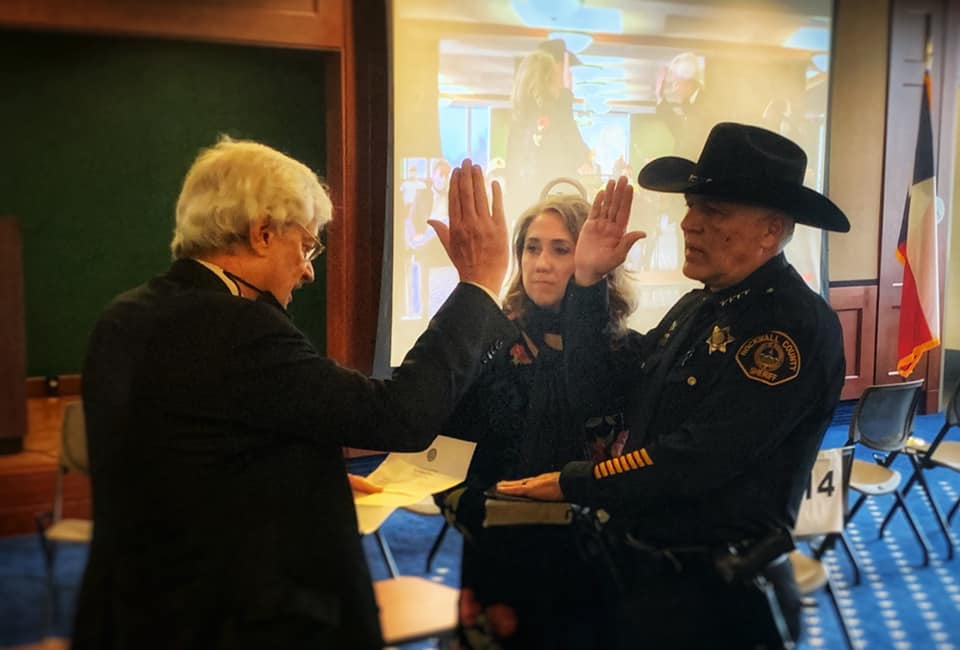 ROCKWALL, TX – January 1, 2021 – Terry Garrett, joined with his wife Dr. Shelley Garrett and family, was sworn in on January 1, 2021, by 382nd District Judge Brett Hall as the 18th Sheriff of Rockwall County.

Sheriff Garrett began his 40-plus-year career in public safety in 1976, while still in high school, working as an ambulance attendant. He joined the Rockwall Volunteer Fire Department in 1978 while continuing to work as an EMT for American Air/Land Ambulance and as a dispatcher for the Rockwall Police Department.

For 26 years, Sheriff Garrett worked for and served the citizens of Rockwall as a patrol officer, initiated the department’s crime prevention program, conducted juvenile investigations & public information duties, and was the lieutenant in charge of criminal investigations, records, evidence, training, and community service. During those years, he was also an active member of the Rockwall Volunteer Fire Department, serving as chief and training officer. He is a dive/recovery specialist with certification from the Underwater Institute/SWTSU/TSU.

Sheriff Garrett was appointed Director of Public Safety for the City of Heath in 2006, where he served for 14 1/2 years as both police and fire chief.

Sheriff Garrett will now lead over one-hundred and thirty (130) sheriff’s office personnel and a two-hundred and forty-three (243) bed detention center with an expansion underway.

“I look forward to continuing service to citizens of Rockwall County and working with a great team of professionals at the Sheriff’s Office,” said Rockwall County Sheriff Terry Garrett.

Stay tuned for Blue Ribbon News’ full story on all of Rockwall County’s newly elected officials who were sworn in today.

Terry Garrett sworn in as Rockwall County Sheriff this morning added by Editor on January 1, 2021 2:06 PM
View all posts by Editor →