Photography Contest coming ROWLETT,TX. (July 14, 2014) The Rowlett Arts and Humanities Commission has announced the winners for their 2014 Writing Contest. The winners were presented awards in three genres of writing, categorized by Youth and Adult Divisions. Seventy-one entries were received and all works were judged through a partnership with the University of Texas […] 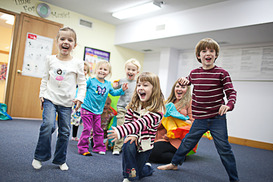 Kindermusik classes provide music and movement activities to foster brain development in babies and young children, while helping them bond with parents ROCKWALL, TX (July 13, 2014) After completing a comprehensive training program that incorporates education in child development and music concepts from Kindermusik International, Danielle Yonchak received her Kindermusik license and opened a new […]

ROCKWALL, TX (June 25, 2014) This Thursday marks the season opener for Rockwall Summer Musicals, as the theater company presents Rodgers and Hammerstein’s “South Pacific,” directed by Barbara Doudt. Based on James A. Michener’s bestseller, “Tales of the South Pacific,” the classic musical features a cast of talented local actors, including Ashley Renee Watkins – […]

ROCKWALL, TX (June 24, 2014) After two weeks of practice, the girls in the JER Chilton YMCA summer ballet classes had a chance to perform for their families in a recital last Saturday. The little ballerinas twirled in tune to “Do You Want to Build a Snowman?” and “Love is an Open Door” from the […]

ROCKWALL, TX (June 20, 2014) The Rockwall County Historical Foundation is pleased to announce, in conjunction with the special events planned at Harry Myers Park for the 4th of July Celebration, The Museum at Harry Myers Park will be open for visitors and conducting free tours on Friday, July 4th, 2014 for extended hours from […]

ROCKWALL, TX (June 20, 2014) Tickets are on sale now for Schoolhouse Rock Jr., the summer musical opening Tuesday, June 24 at the Rockwall Community Playhouse. Schoolhouse Rock Jr. is based on the ABC-TV educational animated series which area from the 1970s-1980s. It will be directed by Stacey Kluttz. Performances run through June 29. Tuesday through Saturday […]

ROCKWALL, TX (April 27, 2014) The last Friends of the Library meeting of the 2013-2014 year will be held Tuesday May 13th at 11 a.m. in the Community Room of the Rockwall County Library. Rockwall resident Barbara Doudt has put together vignettes from the 2014 Rockwall Summer Musicals season and will present the program.  Talented […]