Friends of the Rockwall County Library prepare for new year

ROCKWALL, TX. (July 6, 2015) Friends of the Rockwall County Library, a non-profit organization, is busy preparing for another great year.  Membership dues are a large part of its fundraising efforts. If you have not renewed your membership or would like to join FOL, you may pick up a brochure at the front desk or […]

ROCKWALL,TEXAS(September 9, 2014) More than 140 people attended Tuesday’s Friends of the Library meeting to hear Gloria Campos speak. Campos retired last spring from local ABC affiliate WFAA Channel 8 after over 30-years as a newscaster. She told the audience that libraries and books have always had a special place in her life.  As a child, […]

ROCKWALL, TX (June 9, 2014) Rockwall County Library’s Adult Summer Reading program is more exciting than ever. The 2014 program, called Literary Elements, will offer an assortment of prizes. For the first time ever, participants will be able select the prize they are hoping to win. Prizes include a golf package for four, a tour […]

ROCKWALL (March 10, 2014) Pancakes, syrup and sausage will be on the menu at the All-You-Can-Eat Pancake Breakfast to benefit the Rockwall County Reading For Adults Program on Saturday, March 22nd, 2014, at Applebee’s located at 687 E. Interstate 30,Rockwall, TX 75087. Hosted by Applebee’s, the Reading For Adults\volunteers and tutors will staff the restaurant […]

ROCKWALL ( November 4, 2013) Saturday, November 23 at the Rockwall County Library: Rockwall’s Harmonic Motion School of Classical Ballet presents 30 minutes of highlights from its upcoming performance of “The Nutcracker.”  The FREE performance is the perfect way to introduce children ages 3 and up to this holiday classic. Parents should bring cameras for pictures […] 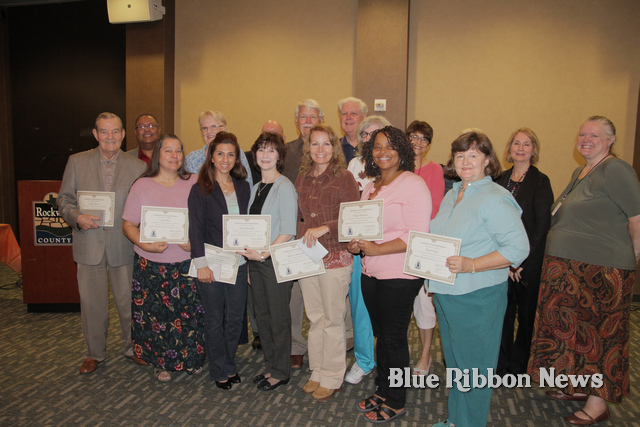 (ROCKWALL COUNTY – October 30, 2013) This year, the Rockwall County Library’s Reading for Adults program has held 1,538 class meetings and impacted the lives of 655 students, thanks to efforts of 79 volunteers donating an amazing 7,833 3/4 hours. A Tutor Appreciation Event was held October 28 at the library, where volunteers were recognized […]