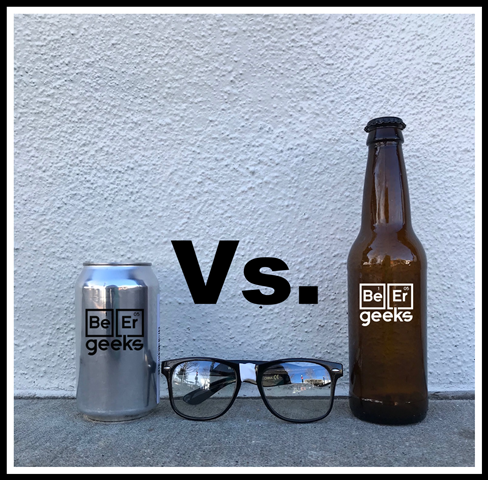 For a long time, bottles have dominated the beer industry, craft or otherwise. Increasingly however, cans have encroached on bottles’ territory, becoming more and more common as the preferred choice of breweries across the U.S. and to a a lesser extent, Europe. Some people take issue with this, often associating cans with cheaper, lower quality, and even metallic tasting beer.  Hopefully though by the end of this article we CAN (see what I did there?) convince you that in the majority of cases, the humble can is the superior package for the magical liquid we call beer.

First, it’s important that we pinpoint the things that damage beer and change its flavor, often for the worse. Let’s begin with sunlight, which will cause a beer to have the “skunky” smell and flavor.  The second thing that’s going to damage the beer is oxygen, which will oxidize it and cause off flavors and aromas making it winy/vinous or even papery like cardboard. In some cases, oxygen is necessary; for instance, when bottle conditioning/fermenting, most common among certain Belgian styles.

Now let’s compare our two beer receptacles to see how they stack up.  Clear and green glass bottles allow the majority of the light to contact the beer, while brown bottles are much better; they still allow more light in than ideal. There are exceptions in cases when breweries paint the bottle or completely cover it with the label (i.e. Delirium Tremens). Cans, on the other hand, block 100 percent of the light.

Okay, what about oxygen?  It’s important to understand that although the caps on bottles are watertight, they aren’t completely airtight. Cans, if properly sealed, are totally airtight.

People often fear that cans will cause a beer to taste metallic, but in blind taste tests the vast majority cannot taste a difference.  This is partially due to modern beer cans including a liner that prevents contact with the metal and can remain intact anywhere between a year and a decade.  If it does taste different, it may just be that it’s better preserved.

Lastly we would be remiss if we didn’t mention the environmental impact differences.  Cans are much lighter, thus less fuel is needed to transport them.  Cans are more easily recycled since they can be crushed, allowing for more material to be recycled.  To top it off, they yield more reusable materials upon being recycled than bottles.

So next time you’re about to judge the can, just remember all it CAN do! Stop by today to shop our vast array of cans from all over the world!

Beer Geeks is a craft beer bottleshop located in downtown Rockwall. We have over 350 craft beers from all over the world. Everything is organized by style and priced as singles, so you can build a custom pack out of anything, everything in the store. Where it’s okay to geek out about beer! www.BeerGeeksShop.com This is a sponsored guest column.