ROCKWALL,TX. (September 8, 2014) The National Interscholastic Swim Coaches Association (NISCA) has named Rockwall High School’s William Rapp and Raena Eldridge ‘All Americans’ in swimming in the annual All American list. Rapp earned All American in the 200 Yard Freestyle where he placed 4th at the UIL State 5A Swimming Championships. Eldridge earned her All […] 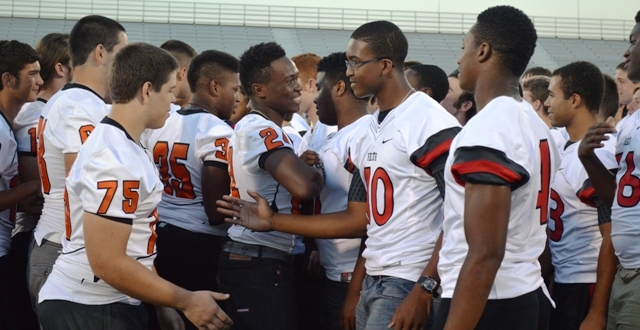 ROCKWALL/HEATH, TX (September 5, 2014) The Rockwall and Rockwall-Heath high school football squads hit the field at Wilkerson-Sanders Stadium under the Friday night lights, except this time they weren’t going at it on the gridiron as rivals; they were uniting together in support of each other before their big games at AT&T Stadium, home of […]

ROCKWALL, TX. (August 13, 2014) The Rockwall Home School High School program recently received some national attention as the coach and one of the players were honored by USA Water Polo. Ty Cowan was selected as S&R Sports Athlete of the month for July 2014. Coach Angela Uno made these comments about Ty: “Ty Cowan […]

US Open Triathlon, hosted by Rockwall & Heath, to serve as Collegiate Championship

ROCKWALL,TX. (August 12, 2014) Three Rockwall athletes teamed up with the North Texas Thunder Water Polo Team to participate in the 2014 Junior Olympics competition in the San Jose/Palo Alto, California area. The competition is the largest water polo tournament in the world drawing over 800 participants. The boys divisions played from July 26th to […]