(ROCKWALL, TX – June 28, 2015) “I’m dreading summer, Coach.” A middle-schooler dreading summer, dreading the break from school—the bane of their existence? Then she described an Olympic-esque training regimen. Playing for three teams, training, traveling to tournaments every weekend, clinics, camps; I needed a three-day weekend after hearing her summer schedule. Man, times have […]

HEATH, TX. (June 25, 2015) We drove along the desolate landscape of south Texas toward the Gulf of Mexico for our first ocean vacation as a family. We finally came upon a colorful seaside village where the shops stood too close together to allow more than a glimpse of the water. As we circled to […] 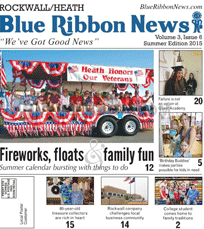 Annual Subscription Service Now Available for those living outside our Rockwall/Heath free delivery zone ROCKWALL/HEATH/FATE, TX (June 24, 2015) Here’s a digital look at our latest print edition which is on its way to more than 18,000 homes and businesses throughout Rockwall and Heath this week.  And now we’re delivering to the Woodcreek community in […]

ROCKWALL,TX. (June 24, 2015) When I am asked by parents about homework for their child I flash back to the beginning of my favorite Dickens story, “A Tale of Two Cities.” His wonderful work starts, “It was the best of times, it was the worst of times,” an apt analogy for the thing we call […]

ROCKWALL, TEXAS – June 23, 2015 – Fans of the famous Pumpkin Patch pickles and jalapeño peppers will still be able to get these popular delicacies, but orders must be placed no later than August 1st.  They will be available in September thanks to the efforts of Carolyn Duckworth and crew who are making them […]

(June 8, 2015) HEATH, TX. Holy Trinity Episcopal Church, located at 1524 Smirl Drive in Heath, will offer Vacation Bible School from 5:30 to 8 p.m. Sunday through Thursday, July 12-16. The theme of this year’s VBS is “Everest”. To find out more about this year’s theme, visit http://www.group.com/vbs/everest. Also, watch this video on this […]

Register through Aug 17 for ROCK After School Program

(June 8, 2015) ROCKWALL,TX. Join the fun with the Rockwall High School Stingerettes this summer for their annual summer dance clinic, 9 a.m. to noon August 10 through 14 at Utley Middle School gym. Stingerette Officers will teach dance technique and a routine to be performed the last day of camp.  Campers will receive refreshments […]